Comparing Backbone Networks of Major ISPs. Does your ISP matter?

Internet Service Providers (ISPs) are like fish (hear me out).

Just like fish, they come in a fabulous range of shapes, sizes, and capabilities, and you must treat them according to their characteristics. You wouldn’t try to wrangle a giant tuna with a beginner’s fishing rod, would you?

Enough already with the hokey similes. The fact is you might neither know or care about the wondrous varieties of ISP, and how their different backbone networks massively affect the kind of services they can provide.

Thing is, until you understand the differences, you won’t know whether it matters to your business – so, if network connectivity is a big deal in your line of work, you’d be wise to read a little further.

In this previous post, we went through the various facets of what differentiates (and what doesn't differentiate) ISPs, and in this post, we'll dig further into the backbone infrastructure / peering component of ISP differentiation.

A Couple of Points to Note…

Before we cast off and head out for the deep waters (ok, ok, I’ll stop), there are a couple of terms you’ll need to get under your belt to help us better explore the world of ISP tiers and backbone networks.

There are several ISPs that make up the internet (around 10,000 separate networks, with over 7,000 in the US alone). Data constantly flows between different ISPs, and there are two primary ways this handoff can be achieved – transit and peering. These two different kinds of ISP relationship are used to determine the complex hierarchies of the networks.

Transit connections must be paid for by one party (usually the smaller one). They get charged a monthly fee, and then pay for metered usage on top of that. It’s kind of like calling long distance or abroad when your phone plan doesn’t include it.

If you’re an ISP, and your customer is sending data to an endpoint that’s not on your network, you’ll need a transit connection. The more data they send – the higher the bill.

If someone’s your peer, you’re more likely to look for a mutually beneficial arrangement, right? Well, so do the ISPs. When there’s enough data zipping back and forth between one ISP and another, they’ll often choose to create a peering arrangement.

Neither party charges the other for the service – they just find a mutual data center and maybe haggle a little over who pays for the colocation, space, and power.

Reaching into our sack of similes again, transit is a little like calling a cab, and peering is more like you and your buddy arguing about who’s going to drive, and whose turn it is to pay for gas. Of course, there’s a little more to it, but that’s as much as you’ll need to make it through this article.

So, how do ISPs decide who’s on their level? Well, providers can be roughly divided into three tiers, and your tier determines how you’ll hand off with other providers.

The Three Tiers of ISPs

Word to the wise – don’t get too hung up on these categories. At the end of the day, ISPs are businesses, and there are plenty of other factors that determine how they’ll interact, especially at the local level. It’s more of a handy guide to help you navigate the market effectively.

Tier 1 ISPs are the big beasts. Small in number, large in size, Tier 1 ISPs don’t need to pay anyone for a transit connection – that’s their defining characteristic. Their networks span multiple countries and continents, and they maintain a strong presence in large data centers and in most internet exchanges.

They tend to be primarily B2B entities now with little need to pursue the domestic markets of the countries they serve. A fair proportion of these companies have roots that predate the internet, having emerged from the old monopolies that ran the phone networks – some (like British Telecom) still carrying these old names that haven’t been seen in the consumer marketplace in decades.

However, mergers, acquisitions, and name changes aren’t uncommon amongst the Tier 1 ISPs. As of December 2022, we’re talking about companies like the following.

Tier 2 ISPs still have plenty of clout – they often have a hefty share of several national markets for both B2B and B2C. They’re usually household names you’d hear from the lips of consumers if they were asked to name an ISP.

On the ISP food chain, they have many peering relationships – but only with each other. Tier 1s view them as valued customers, and Tier 2s are obliged to pay them for transit connections and usage.

Tier 2 ISPs like to talk about their peering relationships, but less so about their transit connections – when competing for valuable clients, it’s important for them to seem as close to Tier 1 as possible.

Tier 2 ISPs include the following.

Tier 3 ISPs make up the rest of the market and, for consumers, they’re vital. Why? Competition, that’s why. Tier 3 is very competitive, with ISPs looking to outdo each other on price, service, and customer support.

Tier 3 ISPs may be developing some peering arrangements, but they’re largely reliant on paid transit connections for the bulk of their network. 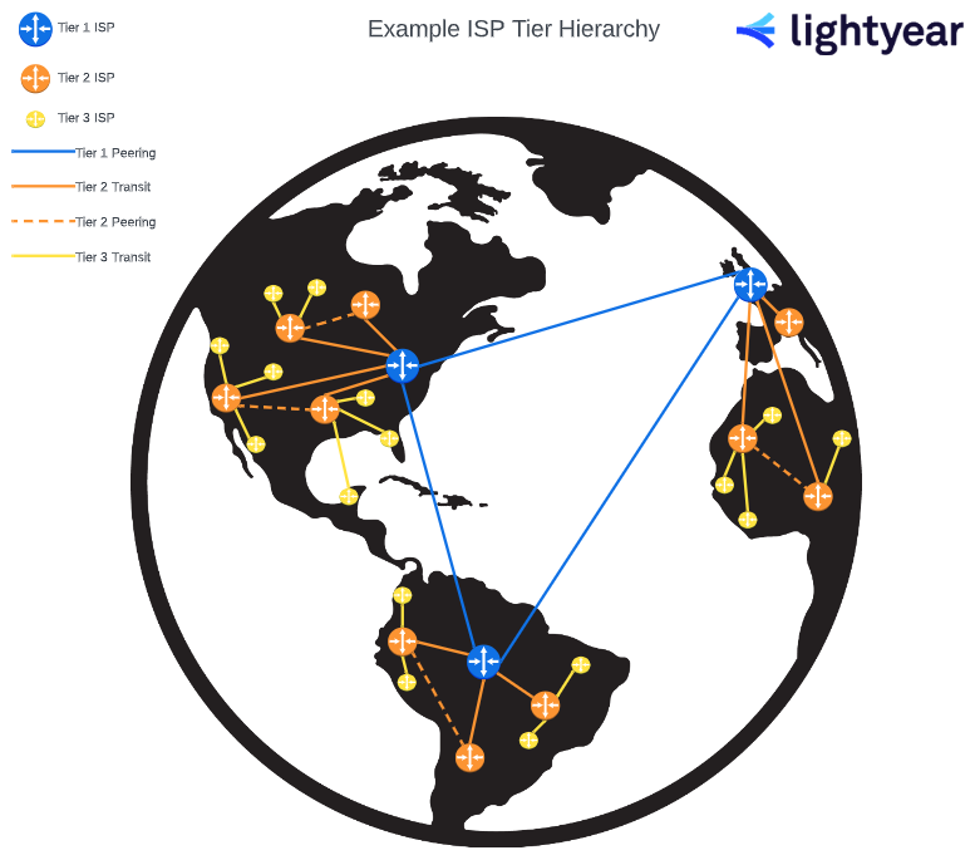 What kind of backbone network will each tier of ISP have?

Why does the ISP tier matter?

What kind of internet service do you need to run your business effectively and efficiently? The answer to that question will determine which tier of ISP you need. Here are three hypothetical examples based on real-life use cases that will demonstrate how different tiers of ISP suit different businesses.

1. Ultra-HD Video is an online content provider, streaming high-quality entertainment to living rooms all over the country.

The best option is… purchasing its network service directly from a Tier 1 provider, as well as collocating network equipment in a data center facility it can share with the ISP. It’ll be more expensive, but Ultra-HD understands its customers place nearly as much value on the quality of content delivery and access, as they do on the actual content.

2. Joe’s Garage, a local auto-mechanic with a fondness for old Zappa records. He needs the internet for credit-card transactions, ordering parts, and giving his customers a little guest Wi-Fi action while they’re waiting for Joe to finish their tune-up. Is it important? Sure. But can he get by if his broadband goes down one afternoon? It’s an inconvenience, but it’s not going to stop him fixing cars.

The best option is… taking advantage of the competitive pricing and emphasis on customer service provided by the multiple Tier 3 ISPs who’d be happy to give Joe the reliable internet he wants at an affordable price.

3. A1 Domain Name Service is a third party DNS service. They won’t need to pass huge amounts of data – but to keep their customers happy with their website load speeds, they’ll need a low-latency solution, with as few hops as possible.

The best option is… a Tier 2 ISP that can provide the lower latency service via transit connections to the Tier 1 ISP networks at a cost that A1 can comfortably justify.

If you’re trying to figure out what kind of ISP (and backbone network) your business needs, treat these tiers as a starting point (and a very rough guide to what kind of budget you might need to set aside).

If you’re ready to get more involved and find out how this all breaks down in your area, for your business, don’t be daunted – Lightyear is here for you. Our platform has been created to guide you through the procurement process and ensure that you can get the internet service you need at the best possible price.