Deirra Footman’s interest in the IT field began at a young age growing up in Baltimore, Maryland. She has worked in various industries including education, government, healthcare and is currently a senior network engineer at 14West. By night, Deirra runs a successful blog, CCIE by 30, and social media presence with the goal of mentoring women and people of color who want to join the tech field.

As a freshman in high school, Deirra saw a presentation that inspired her to enroll in the Cisco Network Academy at the age of 15. This program ultimately led to her first IT internship and evental full time job with the Baltimore City Public School District. Prior to joining the Cisco Network Academy, Deirra said that she “didn’t understand that there were people who made the internet work.” Flash forward a few years and Deirra is now one of those people!

"It's a Miracle the Internet Works"

After seeing the underbelly of various network infrastructures, Deirra will matter-of-factly tell you “it’s a miracle the Internet works.”

Deirra has seen a whole swath of bad network design practices in her days. She attributes this to the requirement for network engineers to juggle so many tasks, which often results in network “bandaids” that solve an immediate need but ultimately cause more problems. Chewing gum and duct tape is another euphemism she likes to use for how network issues sometimes have to be solved on a fast paced and understaffed corporate IT team.

In Deirra’s experience, when you’re working with a stubborn or inflexible network infrastructure (or IT team) where a certain app can “never have downtime,” this sticks your networking team between a rock and a hard place. When an IT team is tasked with supporting legacy (and aging) infrastructure while also designing and turning up the latest technological addition to the network, issues are likely to arise.

What’s next for network engineers?

In Deirra’s opinion, network automation and SD-WAN are the most exciting developments in the world of network engineering today. 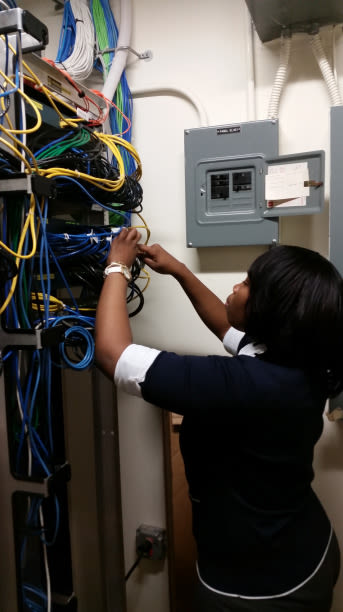 However, Deirra is adamant that all network engineers really need to understand the underlying network before automating it. She pointed to a recent Verizon outage, that was caused by faulty network automation, where they routed too much traffic through Pennsylvania as a great example of how network automation can go wrong when you don’t understand the underlying network principles.

Deirra utilizes SD-WAN in a small capacity today for her remote offices, noting that it offers the ability to deploy a full office without engineers being on site. Before SD-WAN, this was a much larger challenge due to the high level of expertise needed to configure a new network on site.

The performance monitoring abilities of SD-WAN is another feature Deirra is excited about. Being able to understand what's happening in your network, see your network from a user standpoint and look at the full “digital supply chain” is a huge game changer for network engineers. Deirra is particularly excited how this will help calm tensions between teams and stop the finger pointing that often takes place between teams, e.g. “It’s not the network, it's your application!”

Women, and especially women of color, make up a small percentage of the tech workforce today. According to a report by Entelo, there are about 19% of women in entry level and mid-level roles in the tech industry, and only 10% of executive level tech positions being held by women. Those numbers are even smaller when you look at the network engineering field.

Deirra is very passionate about providing mentorship and opening doors for women and people of color in tech because she didn't have it early on in her career. In 2016, Deirra founded CCIE by 30, her blog focused on sharing her journey as a network engineer and a woman in tech. She uses CCIE by 30, Twitter (with a casual 9k followers), and other social platforms to spread her message and educate other up and coming network engineers.

If you’d like to learn more about Deirra check out CCIE by 30, follow her on Twitter (@ccieby30), or reach her by email here: [email protected]. If you enjoyed this interview, check out the other interview in our Women in Network Engineering series: Serena/SheNetworks!